So pleased to see a focus on children and youth in migration research! 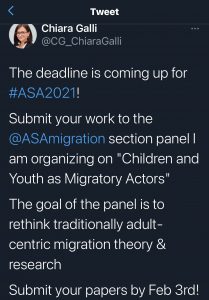 “Immigrant and refugee children and adolescents form a growing socially, culturally, and economically diverse group with the potential for wide-ranging adaptation outcomes. The goal of the study was to examine whether developmental competencies (social-emotional and academic) and sociodemographic disparities (e.g., SES and migration class) identified in kindergarten forecast the academic achievement trajectories of first- and second-generation immigrant and refugee children, from childhood to adolescence. The study used a retrospective, longitudinal, population-based design by making use of linked, individual-level administrative data from four sources… to identify a study cohort of immigrant and refugee children in British Columbia, Canada …. We utilized an analytical approach (group-based trajectory modeling) that allowed us to capture heterogeneity in the Grade 4 to Grade 10 academic (literacy and numeracy) trajectories.

“The resulting literacy and numeracy achievement trajectories were wide-ranging–some children thriving, some catching up, and some falling behind over time. Children’s developmental competencies assessed in kindergarten (literacy, numeracy, and social-emotional) were found to predict later trajectory group membership in significant and, at times, interacting ways. Trajectory group membership also differed by migration class (refugee/immigrant), generation status, socioeconomic status, English language learner status, and sex. The findings highlight the need for early, targeted school and community interventions that will help set all immigrant and refugee children onto long-term paths of positive adaptation.”

“This study tracked the academic achievement of 9,216 immigrant and refugee children in British Columbia, Canada from childhood to adolescence (Grade 4 to Grade 10) and found groups that thrived over time, that were catching up, and that were falling behind. Children’s likelihood of following each of these paths depended upon their academic and social-emotional competencies in kindergarten as well as a number of other sociodemographic factors (e.g., socioeconomic status). The findings highlight the need for early, targeted school and community interventions that will help set all immigrant and refugee children onto long-term paths of positive adaptation.”

In the special issue of Applied Psycholinguistics, 41(S6), The Language, Literacy and Social Integration of Refugee Children and Youth, a research report entitled Transition to adulthood of refugee and immigrant children in Canada by Yoko Yoshida (Dalhousie University) and Jonathan Amoyaw (Dalhousie University).

This resource is available via paid subscription, but the freely available abstract includes an extensive bibliography worth reviewing.
The Canadian Longitudinal Immigration Database, used in the research, can be found here.

January 13 Update: The deadline for applications has been extended to January 22.
The Child and Youth Refugee Research Coalition (CYRRC) is a nationwide alliance of academics, community partners and government agencies working to promote the successful integration of refugee children, youth and their families.
The CYRRC has issued a Call for Proposals for individuals and groups to produce a series of podcasts using the CYRRCs research. and with the help of the CYRRC.
Please see below for more information. 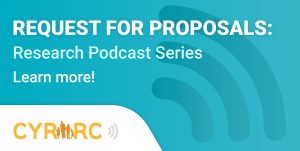 Great news for Ryerson University’s School of Early Childhood Studies. Dr. Judith Bernhard is returning!
Dr. Bernhard (PhD, University of Toronto) is a tenured full professor with over 25 years of teaching and research experience in the areas of diversity, inclusion, and settlement of newcomer children and families in early childhood settings. She is affiliated with Ryerson’s MA program in Immigration and Settlement Studies.
Dr. Bernhard’s recent research interests are migrant and refugee families with precarious legal status and Latinx in the educational system.
Dr. Bernhard’s book Stand Together or Fall Apart: Professionals Working with Immigrant Families is an excellent resource for practitioners who take a strengths-based approach to working with newcomer families and children. 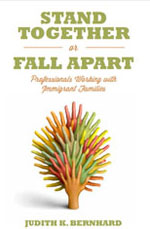 January 20, 2020 by admin Advanced Studies Early Learning and Child Care Parenting Research Settlement
From the Abstract:
“This study explores the asylum claims of unaccompanied children concerning sexual orientation and gender identity (SOGI) and examines how case officers at the Swedish Migration Agency (SMA) responded to the credibility of their claims. The SMA provided one calendar year of asylum decisions concerning unaccompanied children, and 16 SOGI cases were identified. A thematic analysis of the cases was conducted. The results showed that case officers directed their focus to the quality of the children’s sexual relationships. This indicates that the case officers expect children to engage in long-term relationships similar to adults, despite their age. Furthermore, case officers tended to only render narratives credible if the society as whole was narrated as perpetrators. This indicates that case officers expect origin societies to be monolithic. The main conclusion, therefore, is that case officers are guided both by homonormative as well as homonationalist views in their decision-making process”.
August 14, 2019 by admin Advanced Studies Child Health Child Welfare Identity Refugees Research Unaccompanied children

Interesting recent article in PLoS ONE, 14(7) on “Strengthening resilience among migrant mothers living in Montreal, Canada” by Thalia Aubé, Sarah Pisanu, Lisa Merry.
From the Abstract:
“La Maison Bleue is a community-based perinatal health and social centre in Montreal that provides services during pregnancy up to age five to families living in vulnerable contexts. The study aimed to describe: 1) the challenges and protective factors that affect the well-being of migrant families receiving care at La Maison Bleue; and 2) how La Maison Bleue strengthens resilience among these families.
Methods
“We conducted a focused ethnography. Immigrants, refugees, asylum seekers and undocumented migrants were invited to participate. We collected data from November to December 2017 via semi-structured interviews and participant observation during group activities at La Maison Bleue. Data were thematically analysed.
Results
“Twenty-four mothers participated (9 interviewed, 17 observed). Challenges to well-being included family separation, isolation, loss of support, the immigration process, an unfamiliar culture and environment, and language barriers. Key protective factors were women’s intrinsic drive to overcome difficulties, their positive outlook and ability to find meaning in their adversity, their faith, culture and traditions, and supportive relationships, both locally and transnationally. La Maison Bleue strengthened resilience by providing a safe space, offering holistic care that responded to both medical and psychosocial needs, and empowering women to achieve their full potential towards better health for themselves and their families.
Conclusion
“Migrant mothers have many strengths and centres like La Maison Bleue can offer a safe space and be an empowering community resource to assist mothers in overcoming the multiple challenges that they face while resettling and raising their young children in a new country.” 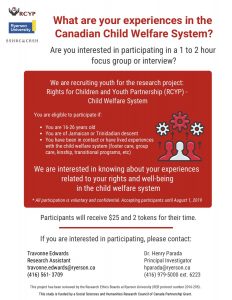 From their website, “The Rights for Children and Youth Partnership: Strengthening Collaboration in the Americas (RCYP) is a SSHRC funded project. The goal of this project is to increase knowledge and factors that either support or hinder the protection of children and youth rights in the Caribbean, Central American and disproportionately represented populations in Canada.
“This project features a collaboration of research from universities, government, and non-government, and international organizations. Researchers involved in the project come from eight different countries around the world including: Canada, Dominican Republic, El Salvador, Guatemala, Honduras, Jamaica, Nicaragua and Trinidad & Tobago”.
RCYP will be relaunching their blog this fall and are seeking contributions from researchers, practitioners and children and youth to share their thoughts, feelings and experiences regarding children and youth rights.
In addition, RCYP is seeking youth to serve on their Youth Advisory Committee. For info, contact @HenryParada_Rye @SSHRC_CRSH

The United Nations High Commission for Refugees (UNHCR) project, The Dream Diaries tells the stories of refugee children from Afghanistan, Somalia, Syria and captures their struggles and their aspirations for their new futures. Inspiring and beautifully filmed, this series is important in gaining an understanding of some of what refugee children and youth experience.